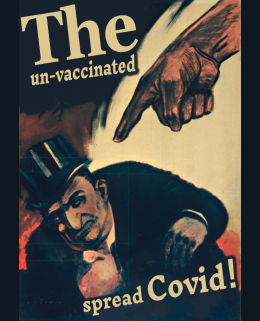 It is certain, by now, that when you look back on 2020 and the years following it, that the sudden flexing of government muscle predicated on the fear of disease is something sociologists and political scientists will be analyzing for years to come. The relevancy of it is the unprecedented global effect of this mania, and it is surely likened to other historical events, such as the rise of the Third Reich, the witch hunts in America, and other savage times in human history where fear caused the general public to impulsively pounce on anything that threatened their safety.

One question that is undoubtedly raised in classrooms is: “How could the entire world embrace such fascist ideologies that so clearly were counter to common sense?”

This question was repeated, even during the COVID Era, when students discussed Nazi Germany. The echoes of the disbelief in how an entire country could embrace racist ideologies that, in 2020, seemed completely silly, resonated everywhere – but it seemed that despite enthusiastically rejecting such ideologies, the people who accepted the methods used by the government during the COVID Era were embarking on a near identical process towards fascism.

This raises the next question: “Why, if they knew about the process of fascism, from censorship to increased governmental control, to tell-tale signs of political witch-hunts and a corrupt media, would they remain apathetic to it?”

I think one of the important things to consider when analyzing the COVID Era is the new-found effect of globalization on the general public. Although, when one thinks about it in retrospect, it would seem that this would provide more information, and therefore, more evidence to criticize such dangerous prohibitions imposed on them by their leaders, there are counter-balancing forces that, it seemed, affected people just as potently.

Surely, you will have seen the videos or records of protests that took place all around the world – however, this is something you will be inundated with because the protests are in line with your current thinking; that is to say, you now know that the entire mania surrounding COVID was ludicrous, and so, you will hail these protesters just as the people in 2020 hailed those who harbored Jews during the Nazi era.

What is less prominent, just as it was during 2020, is the immense amount of ridicule and intellectualization that was directed at these “heroes” during their time of rebellion. That is to say, in 2020, students were exposed to the few that tried to save Jews during the Nazi era, but they were under-exposed to the amount of political, intellectual, and physical pressure that pushed in the opposite direction. Likewise, you will be exposed to those that recognized and fought against the rise of governmental controls over people during the COVID Era, but you are less exposed to the true nature of how difficult it was to believe one was correct in such endeavors.

And in this case, globalization served to retard the general public’s ability to circumvent such pressures. With almost all communications being performed electronically, there were very few communication vehicles the masses used to dialogue with one another. Rather than meet each other in the street to make conclusions, they were inundated with communications on an almost constant basis through computers and phones, but these communications were likewise filtered by the same organizations that were supportive of the push towards fascism.

Accordingly, there must be a unique approach taken when analyzing the COVID Era, as all information was visibly being manipulated by the media. And though the media was able to censor much of it, in order to appear unbiased, it was unable to censor statements that addressed censorship; the central form of censorship embraced by the masses was information that related to COVID, medically, and other forms of dissent went mostly unhindered.

This is plausibly why, as you read this now, you have come out on the right side of this entire debacle, though not without casualties. Despite the fact that globalization has the ability to manipulate the populace, during the COVID Era, they tended to believe that it was not “true” fascism that was being propagated, but rather an exercise of emergency measures for the safety of all.

Nevertheless, it is important to note that during the COVID Era, by and large, those who stated that COVID was dangerous to only a select sliver of vulnerable people, and mostly irrelevant to the rest, were openly persecuted by private organizations, governmental organizations, and this persecution was witnessed by the rest of the populace, and the rest of the populace agreed with such persecution by a significant majority.

When politicians tried to jump on the bandwagon of safety in order to maximize their familiarity with voters, and in an effort to appear vigilant, they launched new, pretty things, such as COVID passes, vaccine passports, and other little check-marks and green stamps that made individuals feel more clean, or special, or safe. And as each mechanism failed to manifest any real solution to the spread of COVID, nor the eventual eradication of hospitalizations as a result of it (rare as they were), these trinkets soon fell out of favor with the general public as they moved onto more interesting things.

COVID became a normal part of life, much as influenza had, and so began the process of intellectualization, where those same politicians and scientists and public figures that were so revered for their persecution of the “heroes” started to become analysed for their failures. But, as the COVID Era was driven by global panic, no direct blame befell these individuals despite the fact that they supported and facilitated the persecution of individuals that opposed the ludicrous nature of the restrictions they tried to place on them.

Just as so many Nazis feigned ignorance, claiming to be “following someone else’s expertise” after the fall of Berlin, nearly all of the celebrities, news media outlets, and political leaders that exercised grossly negligent and willfully destructive actions on the populace during the COVID Era went mostly unpunished, and in retrospect, were even regarded well by many for their vigilance, even if it was exercised in an incorrect manner.

The question that then remains, as it did with Nazi Germany, is: “Was there enough information for the average person to know that what was happening was bad?”

However, it seems to me, the best way to answer that question, is as follows: If any individual, in retrospect, finds that immoral behavior was being perpetrated towards their neighbor, and this causes them irreparable regret, then they are likely the kind of individual that would say “yes”. And if they are the kind of individual that finds themselves facing the same outcome, but excuses their lack of awareness of this atrocity to misinformation from third parties, then their answer is likely to be “no”.

It behooves us, then, to, when we examine both the Nazi and COVID Eras, or any time where mass persecution was supported by the populace, instill in students a strong sense of regret when having witnessed persecution, irrespective of their perceived ability to know when and where to act. The benefit of this is, such individuals are more likely to question the contemporary narrative to future-proof their decisions to avoid such regret.

(The accompanying image is meant to be farce, sourced from actual German propaganda from the 1940s)

House of Cards: The Political Necessity of Mandated Vaccines