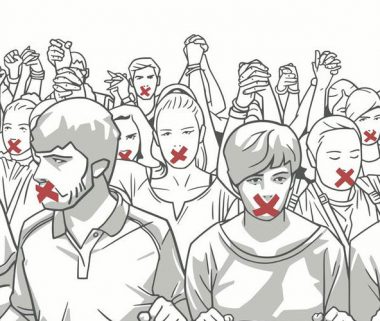 It is undeniable that the advent of this great plague that has befallen the entire globe has served to terrorize millions, billions of people, in a world so easily connected through media, that we have never, as a species, ever before experienced. Survival is our most basic instinct, and fear is its mechanism of action, and with pictures, statistics, and leaders hailing this unprecedented threat as one that must be taken seriously, we are inundated with the desire to protect ourselves and our loved ones. This fear manifests through action: wear masks, clean our hands, stay at home, and remain quarantined where possible.

And irrespective of which side of the argument you fall on, every person can sympathize with the desire to be safe from harm; even aggressive vigilance is understood: self-defense from threat just as one would an acute act of violence.

But in the pursuit of safety, the pursuit of the minimization of harm that this virus is causing, what other ideologies, concepts, and protections are being overlooked? Are there potential costs to this vigilance, and should we examine more carefully how we tread as we move towards a safer world?

Here we include an exact, unadulterated screen shot of YouTube’s current policy on COVID related media: 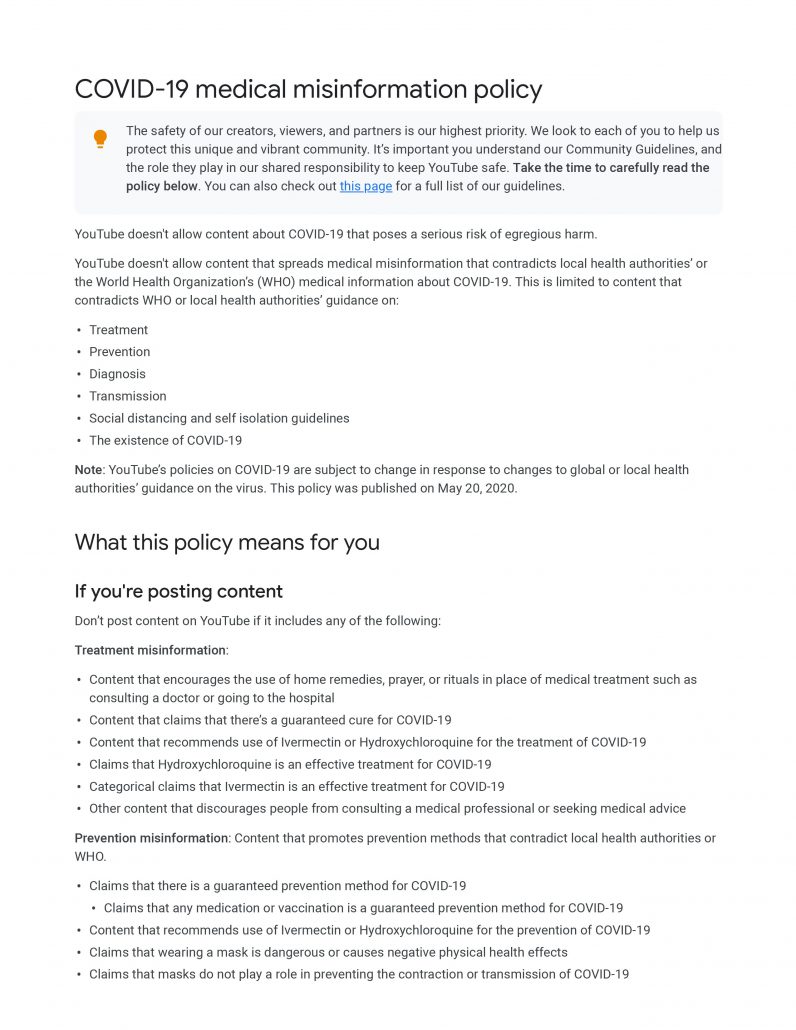 In summary, it states that YouTube will delete any content on YouTube that in any way contradicts or questions mandated information as provided by the World Health Organization (a governmental organization). It is also important to note that this is not a veiled threat; Google has openly deleted thousands upon thousands of videos of a great many types that in any way question, hypothesize, or theorize on COVID. So egregious is this censorship, in fact, that at the current time, if one were to search on Google, simply for information or entertainment, “COVID fake”, “COVID false”, “COVID myth”, or anything along those lines, there is no access to dissenting views. Instead, you are greeted with videos that condemn such misinformation, and nothing else.

“Where they have burned books, they will end in burning human beings.”
― Heinrich Heine

Now, it is understandable that, as we have outlined above, COVID has caused fear, and we wish to be safe from it. But even the most adamant individuals who believe strongly in the threat, in the vaccine, in lockdowns and other methods of control, must acknowledge that a very new precedent is being formed here, though not new in concept. YouTube videos, Twitter tweets, Facebook posts and the like are the “books” of our modern age: they are mechanisms by which content creators may share their creativity or views for others to peruse, discuss, learn, or dismiss.

We will say it once more so it is fully absorbed: the WHO is a governmental organization. Google will burn any books that question what this governmental authority dictates as true.

“Blind belief in authority is the greatest enemy of truth.”
― Albert Einstein

What arguments exist in support of this extreme action? That dissenters may mislead the public with false information? Perhaps. But if the evidence is clear, if the threat is real, is it not up to the consumers to make intelligent determinations about the safety of themselves and their loved ones? And are countering opinions not an important mechanism by which topics are more deeply understood?

“If there’s one American belief I hold above all others, it’s that those who would set themselves up in judgment on matters of what is “right” and what is “best” should be given no rest; that they should have to defend their behavior most stringently. … As a nation, we’ve been through too many fights to preserve our rights of free thought to let them go just because some prude with a highlighter doesn’t approve of them.”
― Stephen King

The problem with censorship, as has always been, and will always be, is that no singular authority is in a position to apply such rules in a manner that benefits the public at large; the scope always increases, or is imprecise, and the evolution of public knowledge becomes retarded.

Imagine a woman posting a video, explaining that meditation, green tea, and deep breathing may help individuals cope with the anxiety of COVID related symptoms. It is undeniable that she is not claiming these mechanisms will fix it, but may may very well, at the very least, assist on an emotional level, if anything. However, this falls under the umbrella of “Alternative Therapies” within the doctrine above. Now imagine someone with extreme paranoia, who is also a hypochondriac, who has just lost his job due to COVID lockdowns, and is at home, alone, perusing YouTube, seeking help for his increasingly extreme psychological spiral. In a free society, he might encounter this video, and he might follow her suggestions: the L-Theanine within green tea calms him down, along with the breathing, and he is able to, for the moment, remain controlled, as his parasympathetic nervous system kicks in, reducing his fight or flight response.

Imagine the current scenario: he searches, and finds nothing but more and more videos on the threat, the increased lockdowns, and the impending global financial crisis. He spirals more and more as the sympathetic nervous system goes into overdrive, the hopelessness begins to consume him, and he decides to take a lot more sleeping pills than he should to silence his mind. The end result is…

“When you tear out a man’s tongue, you are not proving him a liar, you’re only telling the world that you fear what he might say.”
― George R.R. Martin

Freedom of expression, of thought, of writing and sharing thoughts is vehemently defended by humanists: they believe in the inherent goodness and intelligence of ourselves, and as a result, believe that despite misinformation, despite destructive individuals, that through free flowing communication do we all prosper as a society, in a way, using our collective brains to process information and create new and profound discoveries. It is the optimal way to compute and produce, like a huge analyzing algorithm. As soon as you prevent certain aspects of this industry from operating, you immediately not only damage that industry, but you cause irreparable damage to the ecosystem of society; it thrives on every facet of communication, from offensive content to agreeable content – from aggressive content to gentle content. From scientific content to spiritual content.

When one form of content, or one subject is censored, much as in a natural ecosystem, a great deal of harm ensues: overgrowth of another type of content occurs, and can occur in dangerous manners. Those ideas that go unchecked become larger and more prominent, and can begin to censor even more subjects, much as an unchecked predator may begin consuming more and more of the ecosystem.

“We must know all the facts and hear all the alternatives and listen to all the criticisms. Let us welcome controversial books and controversial authors.”
― John F. Kennedy

It is the ultimate act of arrogance for us to be able to decide what value the house fly provides the world when all we know is its irritating buzz; similarly, though  we may encounter COVID related content that infuriates us, it, like the house fly, must be allowed to permeate itself, as it may actually support the quickening of the end of the pandemic in a manner we simply cannot predict. This is the end point we come upon when we stop for a moment to check the costs of our fear going unchecked: it is that in trying to stamp out dissenting voices, we may very well be making our problems worse, and actually be helping our fears come to fruition.

“Everyone has the right to freedom of opinion and expression; this right includes freedom to hold opinions without interference and to seek, receive and impart information and ideas through any media and regardless of frontiers.”
― United Nations

Censorship retards progress, irrespective of the subject matter, purpose, who it offends or who it supports. Whether it be the most offensive thing anyone has ever heard, where we believe it will perpetuate destruction, we perpetuate it 10x by trying to censor it. More dangerous than any physical virus is the false belief that by silencing the voices we deem dangerous, that we avert danger; rather, we expand the danger, and retard social growth.

“To prohibit the reading of certain books is to declare the inhabitants to be either fools or slaves.”
― Claude Adrien Helvetius

Never forget this moment in time, this article, this doctrine as presented above – never forget when the common people allowed organizations to burn books in favor of governmental oversight, something seemingly unimaginable, equal and greater in danger and threat and absurdity than Nazi Germany, or any other sensationalized historical movement that in retrospect seemed absurd. We, like the Germans, are living during a time of true absurdity, and like them, we go about our daily business as if the censorship we are allowing will not come with equally dire consequences.

q: The Irony of Truth

House of Cards: The Political Necessity of Mandated Vaccines
Scroll to top